Home for the Holidays

"Home for the Holidays" is the third stand-alone two hour Christmas special of the "Murdoch Mysteries" that first aired on December 18, 2017 on CBC, followed by a second airing on December 25, 2017 in Canada. Murdoch and Ogden travel to Victoria, B.C. to visit Murdoch’s brother, RCMP officer Jasper Linney. There, they investigate a murder connected to an archaeologist Megan Byrne who has uncovered an ancient Indigenous settlement, leading to a trek through the rugged beauty of British Columbia and encounters with the Songhees and Haida nations. Meanwhile, the Brackenreids are offered a surefire investment opportunity that may not be all it seems. At the Station House, Crabtree and Higgins prepare for a ski-chalet holiday in Vermont with their girlfriends Nina and Ruth, but learn it may be more dangerous than expected. 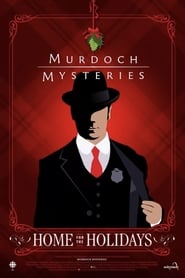 More Posters of Home for the Holidays

See Full Cast & Crew of Home for the Holidays